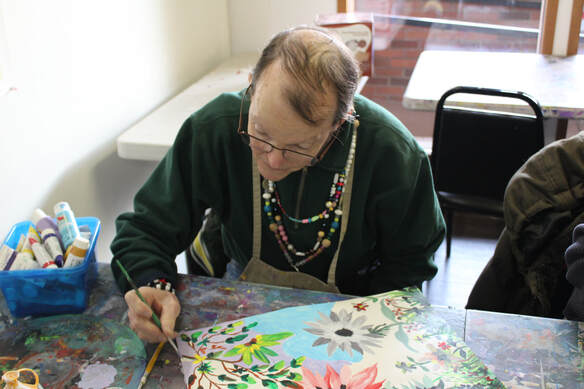 ​Larry Hurst III (b.1957) was born in Chicago and is a prolific and detailed painter. His paintings most often depict scenes of nature inspired by photographs that range from realistic to surrealistic interpretations. Many of his paintings also include unique and fantastical architecture. Hurst enjoys plein air painting and likes to work outdoors if he can. He also likes to take photographs of nature or people to use as references for paintings. In addition to painting, Hurst is also a very talented model house builder and has produced scale models of several houses that he has lived in, as well as the historical Shelton McMurphey House.

Hurst has been making art for over ten years and learned to paint while living in Texarkana, TX. He has continued his studies here at the OSLP Arts & Culture Program since the winter of 2013. There is nothing this artist cannot do. He is a kind soul with an unlimited imagination and precise eye. He has exhibited artwork throughout Eugene and at Arts Unbound in New Jersey.

His other areas of interest include jewelry making, wig making, photography, and portrait drawing. He has completed two mentorships in painting and portrait drawing, working one-on-one with a mentor artist.
Resume
​
Gallery Representation
The Lincoln Gallery, Eugene, OR, Winter 2013 - Present