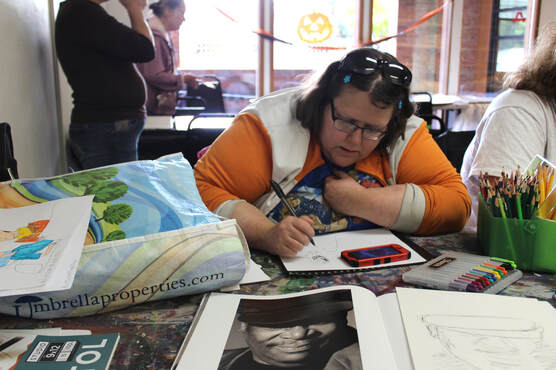 Alyssa Martin (b. 1988) draws cartoons of Star Wars characters and is influenced by rock and roll musicians. She works intensely, for bursts of time, on her drawings. Having a natural drawing ability, her line work is perfect and her style unmistakable. Her drawings are typically of a single character but she will also create comics and illustrations that include characters in storylines or playing in bands. She has created two bands which she likes to draw: KISS Jr. (a band comprised of the kids of KISS band members) and Metallikids (a band comprised of the kids of Metallica band members). Her work is playful, lighthearted, and humorous.

xMartin is also extremely skilled at doll making - creating her own style of detailed, elongated, felt figures of her favorite figures including KISS and the cast of Star Wars. She is always excited to see her work on exhibit and, like most artists, is thrilled when someone makes a purchase.

Martin has been included in many group exhibitions and has had her own solo exhibition entitled Dark Shades at the Ninkasi Tasting Room in 2015. She has been coming to classes at the OSLP Arts & Culture Program since the spring of 2013.
Resume