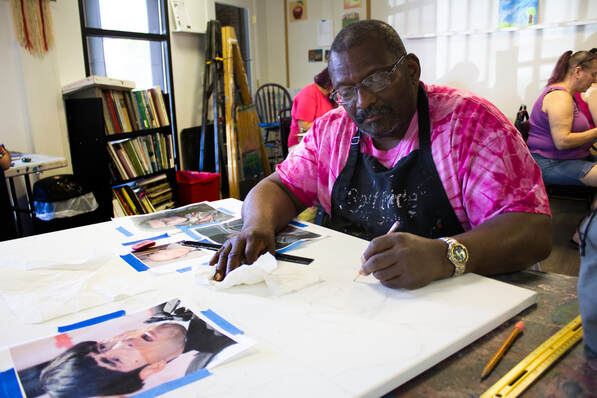 Perry Johnson (b. 1949) primarily enjoys drawing, painting and photography. In the studio, you'll find him at his easel, wearing his black apron and focused on his current project. Perry is an orderly and dedicated artist. In between making artwork for specific exhibitions, or working on commissions, he generally gravitates toward similar subjects. Several years ago, he only painted his family - homages to his beloved mother, his brothers (in particular his triplet brothers), and to his aunts and uncles. He would also paint about his time as an employee at Buick automotive: depictions of when he first started working as a car detailer, and then paintings about when he was laid off 40 years later. Now, maybe because he's processed that part of his life, he focuses on developing his portrait work. He's painted self-portraits, portraits of his triplet brothers, portraits of friends, and portraits of well-known, newsworthy individuals such as John Lewis, Martin Luther King Jr., O.J. Simpson and Donald Trump. He's also enjoys drawing and painting buildings and cityscapes from time to time.

Perry is a quiet man, especially if he doesn't know you that well, but will always shake your hand or smile for a photo. He loves having his artwork on display and the attention he has received for his notable style and point of view.

His other areas of interest include dance, improv theater, printmaking, swimming and participating in Special Olympics. Perry was born and raised in Eugene, and when he's not at the OSLP Arts & Culture Program you will find him at various places and events around town, typically with a camera in hand. He has been an artist at the Arts & Culture Program since the winter of 2013.
​Resume